In Defense of Tinder

I don't know why I feel the need to defend Tinder, but I'm really annoyed with all of the undeserved flack it's getting. Here's why:

"It's a hookup app"
Many people dismiss Tinder as a hookup app. It's certainly possible to use it that way - and that may even have been the intent of the creators - but apps like these produce results based on how you use them. Some people want to hook up, and Tinder makes it easy for them. Don't want to hook up? THEN DON’T USE IT TO HOOK UP. What is it about the app that only allows you to meet a stranger for sex versus having conversations and asking each other out on a date? Oh, it's YOU! Additionally, if you think there aren’t a ton of people using other app such as OKCupid to try to score quick hookups, you’re...well...no one actually thinks this, do they?

Anecdotal evidence: I've matched up with many men in my time using Tinder. When I write to these people, we start a conversation that has nothing to do with sex, and eventually decide to meet for coffee, a drink, etc. I have gone out on several very pleasant dates with very nice men. Yes, I slept with one of them. On the second date. That's actually longer than I usually wait, truth be told. Weeks later, he and I are still friends who enjoy each other’s company AND have great sex. 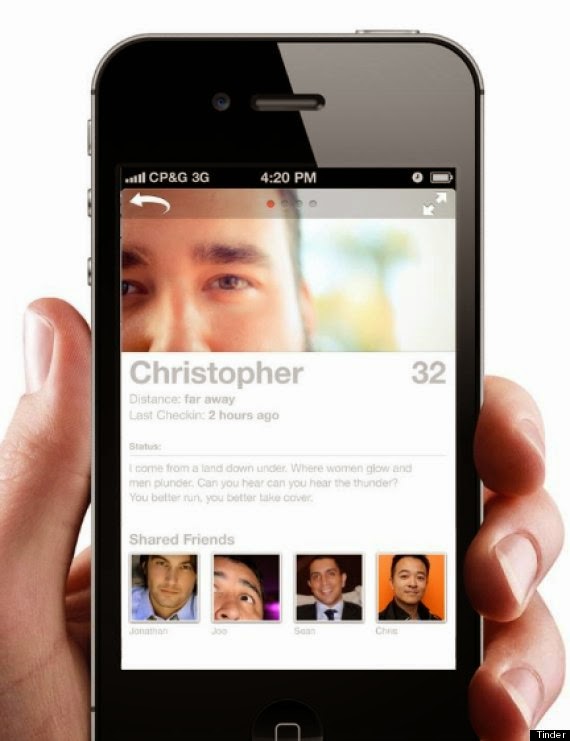 "It's superficial"
The emphasis on photos in the Tinder app has also come under fire. During the swiping process, you are shown a photo of a potential match as well as their name and age. You can swipe left for Not Interested or right for Interested. It’s kind of like window shopping for dates. But here’s the thing: you can also tap the photo to see more photos, a bio (if they've written one), shared interests on Facebook, and even shared Facebook friends. It's not much different than what you find on other dating apps, although it is more condensed. But, can we be honest with each other here? EVERYONE LOOKS AT THE PICTURES FIRST ON THE OTHER SITES, TOO. I'm sorry to yell it, but it's true and it's time we admitted it. OKCupid knows it, and they've said as much while analyzing data in blog posts. I’ve received countless messages from guys who made it very obvious that they didn’t read a single word of my profile. So what makes Tinder the bad guy? Oh, because they are blatant about it. What’s more, this is no different than what we do when we are out in the real world meeting strangers. Actually, in these situations you have even LESS information than what you find on Tinder. Assuming this is a complete stranger, you know almost nothing about the person, other than the fact that you are attracted to their looks.

I’m not saying that looks should be your ONLY criteria when making dates, but, in general, physical attraction is the first step in generating interest between two people, regardless of which site you use, or whether you’re using a dating site at all.

All perfectly “respectable” scenarios. All started with physical attraction.

“I can’t tell if people are a good match because there’s no match percentage or other data to compare”
Okay, you’ve got a point there. Other than front-loading people who have already Swiped Right on you, it doesn’t appear that Tinder makes any attempt to match you up with like-minded individuals. So yeah, you’re going to have to do a little bit of that work yourself. JUST LIKE YOU WOULD DO WHEN MEETING A STRANGER IN A BAR. You can actually tell a lot about someone based on their collection of photos and bio. Someone looking at my photos might conclude that I can have a crass sense of humor (who else would write “fist slut” on their knuckles and proudly show it off?), laugh a lot, go to Burning Man, have wacky hair and style, and play the saxophone. These are all clues about my personality and interests. My bio states that I’m non-monogamous and like to say “bro” a lot. More pieces to the puzzle are put into place. What next? How about a conversation? Just like real-world dating, Tinder forces you to have actual conversations with people to find out their interests, opinions, hopes, and dreams. If you’ve got some dealbreakers, you should probably bring up those topics in your online communication before making a date. Otherwise, the stats and opinions you usually find on dating apps will come up organically as you get to know the person. There’s nothing stopping you from pulling the plug at any time if you come across something that doesn’t fit your idea of an ideal partner. And you might be surprised to learn that some of the things you thought of as dealbreakers or turnoffs are not actually that big a deal, all things considered.

Anecdotal evidence: A little over a year ago, while working at Burning Man, I met a man who, on “paper”, was a terrible match for me. We had extremely different views of the world. We had very few mutual interests. Our dating goals were on opposite ends of the spectrum. He was looking for “the one” to settle down and have kids with. So not my plan. Online, we would have clicked past each other in a heartbeat (or, more realistically, would never have found each other in the first place). But, in real life, a fantastic friendship and relationship formed. We spent every single day together for two whole months. Then we had a whole year of laughter, adventures, good times, and great sex after that. He did finally move on to pursue a relationship that better suited his goals, but I wouldn’t give back that year of memories and good times for all of the high percentage matches OKCupid has to offer.

That was an extreme example, but I could probably rattle off a dozen other cherished friendships and relationships - both past and present - with people that I would have rejected based on pure data. If you require a strict set of values and qualities in your partners and need to know this before you even take the time to start a conversation, that’s your prerogative. But I think you’re missing out on a lot of great potential matches, friendships, and experiences.

Those are the main complaints, but here are a couple of honorable mentions:

“It’s full of creeps”
What dating app isn’t? I haven’t seen any evidence in my own experience that suggests there are more creeps on Tinder than other apps, nor have I read any stats that prove this point. If anything, the requirement that you both like each other before you’re allowed to connect has drastically reduced the number of creepy/annoying messages I get.

“No one writes back”
Again, how is this different from other dating apps? I’ve actually found that more people write back to me, presumably because we’ve already established a mutual attraction.

Sure, the Tinder app has its flaws. There are probably some features that would make it easier to use and help you find better matches. And there are people who use it in ways that contribute to all of the “flaws” I’ve mentioned. They’ll have fun judging people based on their looks and get their quick hookups, but that doesn’t have to be your experience. It certainly hasn’t been mine. With all of the features and percentages and methods of matching, in the end these dating apps are what you make of them. Just like many things in life, you get back from things what you put into them. Maybe you should just give it a chance and really pay attention to the way you are using the app. Or not. That’s fine. It may not be your cup of tea, but plenty of people are having great success with it, and it certainly doesn’t deserve the villain status that popular opinion has assigned to it. So keep that in mind the next time I mention the really great Tinder date I had the other night, and shut the fuck up.
Posted by Misty Kaye at 9:28 PM

Who is the Moody Floozy?

Want to have a steamy chat?